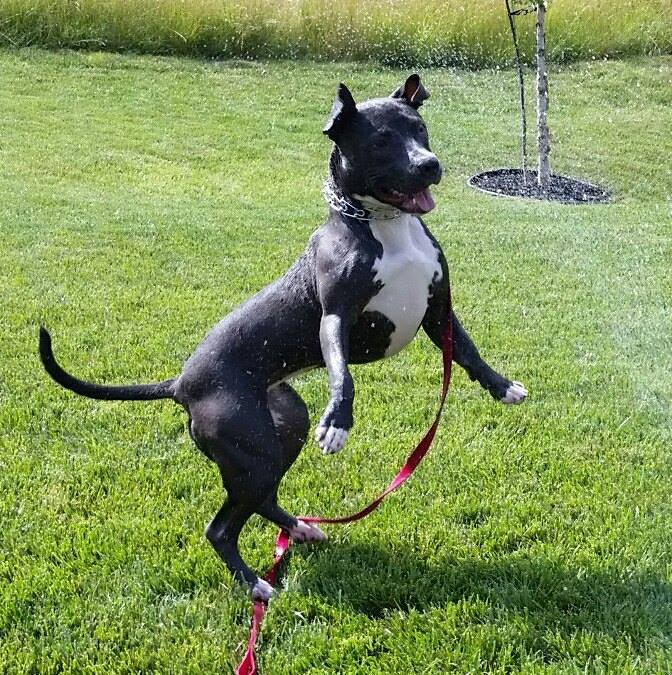 “Ariel” was approximately one year old when left at a shelter. Adore-A-Bull Rescue was called, and they in turn called Robin about fostering a dog with special needs.

She had a wonky leg. Although it added character, there were concerns for her long term health. Veterinarians examined her and couldn’t determine if it was an issue at birth or an untreated fracture. They wanted to be sure it would not be painful as she got older, so the decision was made to have surgery.

They did corrective Osteotomy and ulna surgery to re-structure and straighten the leg.  She returned home in a bright blue cast, and had to be kept inactive. (Not easy with a healthy one-year-old as any parent can tell you!)

After six weeks of fostering with Robin, Ariel moved to her new home. Her new Mom met Ariel at a Furry Valentine adoption event. Due to Ariel’s medical needs, Adore-A-Bull Rescue policy was to wait until she was healthy enough to move to her new home.

Ariel’s cast came off and she needed four weeks of rehab to gain strength in her re-formed leg. Her new family agreed to handle daily exercises, and heating and icing on her leg. Robin continued to help by getting Ariel to therapy once a week.

Ariel is truly lucky to have found a wonderful new family and to have a continuing friend in Robin. This latest photo shows her celebrating by frolicking in the sprinkler!